Adapted from a piece I had written for the Atlantic Food/Health blog.

Among my fondest childhood memories are summer afternoons under the shade of our fig tree, my father just up from his siesta drinking coffee, as yaourtas (the yogurt man) came to deliver the red clay bowls of freshly made yogurt, not yet completely cold. 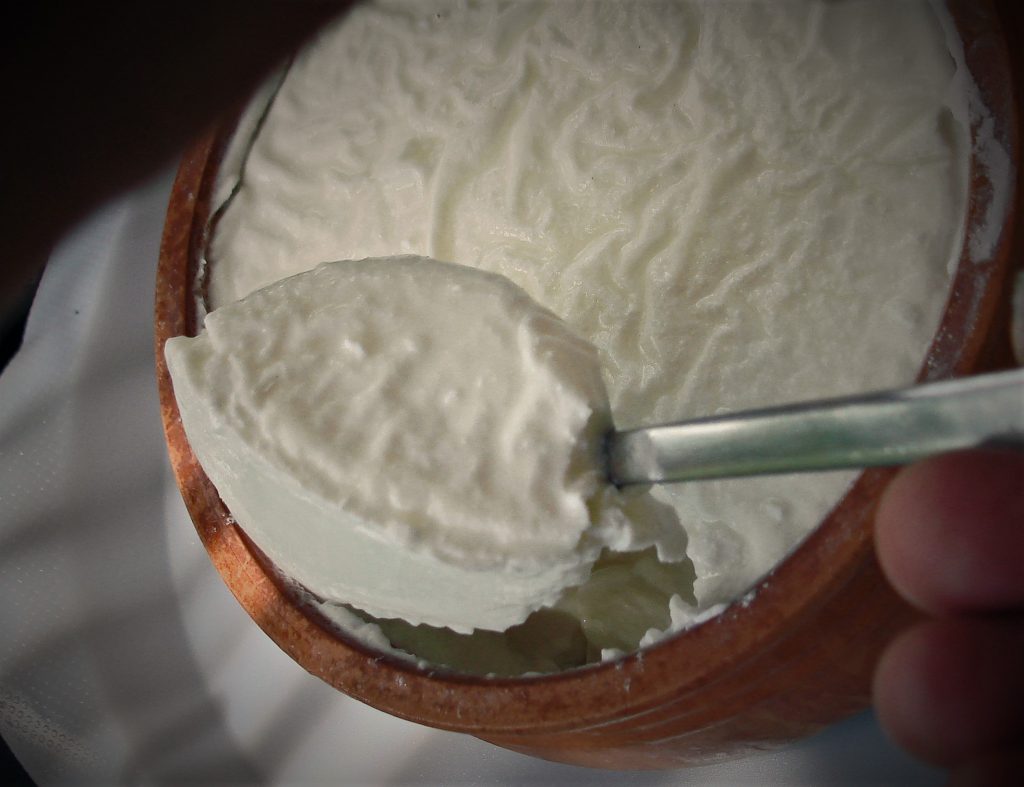 My mother was rushing to the kitchen to bring back yesterday’s cleaned pots, which our yogurt man placed at the top shelves of his tin, two-doored cupboard, which had a handle at the top for carrying. With his cupboard/briefcase briming with freshly made yougurt pots covered with parchment paper neatly crimped at the rim, he visited the homes around our neighborhood. We lived in Patissia, where houses were surrounded by vast gardens, and we often had to chase somebody’s sheep and goats that sneaked in my grandfather’s vast property parts of which he rented to flower growers. Then the area was the outskirts of Athens; now it is completely unrecognizable as it became one of the most densly built parts of the city.

I guess every neighborhood had a yiaourta, as up until almost the mid ‘70ies yogurt was produced artisanaly by the people who raised sheep and goats in the periphery of Athens. They brought their products every day to people’s homes, and the yogurt we got was consumed that same evening. Fresh bottled milk was not delivered to our house, only to the center of the city. We grew up drinking a terrible evaporated milk imported from the Nederlands, I think. It was diluted with equal amount of water and was my daily torture. I was forced to drink it, and immediately got stomach crumps. I probably was lactose intolerant, but my parents thought I was pretending and there was no way I could avoid drinking that horrible milk which made me suffer throughout  the first hours at school. Evaporated milk is still very popular in Greece, although now most people drink fresh milk.

In my family we followed my maternal grandmother’s rule that dictated a pot of yogurt every evening, with bread or paximadi (twice baked dry bread), and some fruit, for all grownups. Lunch was our main meal, and still is for my family. Yogurt was supposed to be a light dinner, but often it was the dessert, for those who devoured copious amounts of leftover lunch, before getting to it. That was the family joke. “I wonder why you still have high blood pressure since you never forget to eat your yogurt at night”, my father teased my grandmother, who claimed yogurt was a panacea. She tried to eat less food in general, but she had a great appetite. My grandmother died at 98, with almost all her teeth, and was only mildly senile. As children we had to eat at least a few tablespoons of yogurt every evening, on top of anything else we were fed.

All yogurts are not equal

I don’t remember when exactly we got our first electric fridge –probably sometime in the late ‘60ies or early 70ies– but we never kept pots of yogurt for more than a few hours, as nobody cared for yesterday’s yogurt. Its taste turned more sour. Any leftover yogurt was used in cooking or baking: for my aunt’s yogurt cake, as an addition to greens or vegetable pies, to accompany stuffed grape leaves or any kind of rice pilaf.

All yogurts are not equal. We grew up eating mostly sheep’s milk yogurt, often made with a combination of sheep’s with some goat’s milk, as Greek shepherds mix the two when milking their flocks. That yogurt is sweeter and creamier than cow’s milk yogurt which is the most common these days. But its flavor varies greatly according to the seasons. Late spring and early summer sheep’s milk is bountiful and wonderfully creamy, since mothers still produce, but their offsprings, spring lambs,  have been slaughtered for the Easter table. This is the time sheep’s milk yogurt is at its best. The flocks have had the chance to graze at the fragrant wild greens and herbs of late winter and early spring, and the milk they produce is trully wonderful. Later in the summer, when they are fed hay and other commercial feed, as the blazing sun dries everything green, the little milk sheep and goats produce is watery and tasteless, and so is the yogurt made with it. At its best time, full fat artisanal sheep’s milk yogurt has at least 6% or more fat, while cow’s milk is about 4,5%.

There is a big difference between the homogenized commercial yogurt of today and the traditional one. There are no stabilizers in the yogurt we used to buy when I was a child, and it is now becoming increasingly popular again in Greece. Traditional yogurt is not thick and has a skin of delicious fat on the surface; we used to fight who would capture more of it in the spoon while eating from the big family-size pots. As you take spoonfulls of the soft traditional yogurt it separates creating little pools of whey. If somebody is not eating the whole pot we immediately place a piece of bread or paximadi next to the remaining yogurt  to absorb the liquid. That bread is the favorite treat of our dogs who every morning eat not just this whey-soaked-morsel but at least a couple of tablespoons of fresh yogurt for breakfast. In a very enlightening piece, Harold Mc Gee explains the process.

A few years back, if thick yogurt was needed to make tzatziki for example, or mix it with greens and herbs to create my yogurt, spinach and parsley salad with walnuts. I would have had to strain it, hanging the regular yogurt in a piece of cheesecloth. Some artisanal producers, especially the shepherds north of Athens, sold stragisto (strained yogurt) in the old days, but it wasn’t something one could get easily until yogurt started to be mass produced in the late 70ies.

Who would have thought that this thick kind, named “Greek yogurt” would become a household product in the US, usually mixed with fruits and with the addition of sugar. The popular sweet and thick, so-called Greek yogurts are low or nonfat, I guess because Americans want to continue enjoy lots of bacon and their cheese-laden pizzas after consuming their ‘healthy’ yogurt…

By a very strange coincidence, our yogurt man was Mr. Filippou, the grandfather (or the great uncle) of the present owners of FAGE, the company that has extended its yogurt business all over the world. From their little workshop in Patissia the family created the first yogurt factory in Athens. The name of the company –now one of the largest food businesses in Greece– is pronounced fah-yeh, an acronym from Filippou Adelfoi Galaktokomikes Epicheriseis (Filippou brothers’ dairy company), which was obviously chosen because in Greek the word ‘fage’ means ‘eat!’.

While working as an editor for a short-lived Greek news magazine in the late ‘80ies, I interviewed Ioannis Filippou, one of the two brothers –the sons of our yogurt man— who created this yogurt empire. He told me that their biggest challenge was to convince people to pass from the traditional parchment-paper-covered yogurt with the thick skin on top to the homogenized sealed cups with long shelf life. They decided to introduce it a Saturday afternoon, as people rushed to finish their shopping and go home. Grocery stores closed early, and people usually got their essentials at corner delis that sold fresh milk, coffee, ice cream, candies as well as cigarettes, newspapers, and magazines. Sellers were instructed to place the yogurt cup in a brown paper bag, so that the consumers would not detect the difference before reaching home, and then Mr. Filippou said, he doubted that they would go back to exchange it. “Once they tasted it, I was sure they would ask for it the next time,” he told me, and he was right. The sealed cup contained yogurt similar to their best seller Total, the creamy thick yogurt that is now produced in the New York plant. Greeks loved it, and FAGE became the number one yogurt manufacturer in Greece, later acquiring EVGA, the oldest fresh milk and ice cream producer in the country, and either buying or creating various other food companies that produce frozen phyllo pastry, biscuits, fruit juices etc. Recently they decided to disentangle themselves from the fresh milk distribution –a fiercely competitive business in Greece— expanding their cheese production.

When they decided to start exporting yogurt to Europe in the ‘80’ies, Mr Filippou told me that he approached tour operators from the UK and Germany and found out which city or neighborhood the tourists came from. Then he arranged to send trial crates of yogurt to delis at those specific places. He was sure that the people who had tried the yogurt in Greece would be willing to pay the extra cost.  Again, the experiment was a success, and Total yogurt gradually found its place in the refrigerators of the gourmet supermarkets throughout Europe. The company tried a similar approach in the US: Instead of a costly national ad campaign in 2009 they sent buses that distributed free samples in various parts of the country.

Needless to say, that Filippou family, the yogurt millionaires, are the equivalent of the Greek shipowners of the past. They are patrons of the arts, and the center of the most talked about Athenian society events…

3 thoughts on “Our Daily Yogurt is not ‘Greek Yogurt’” 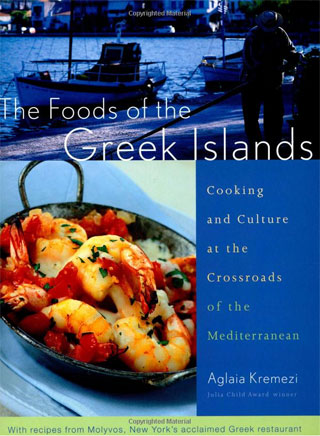